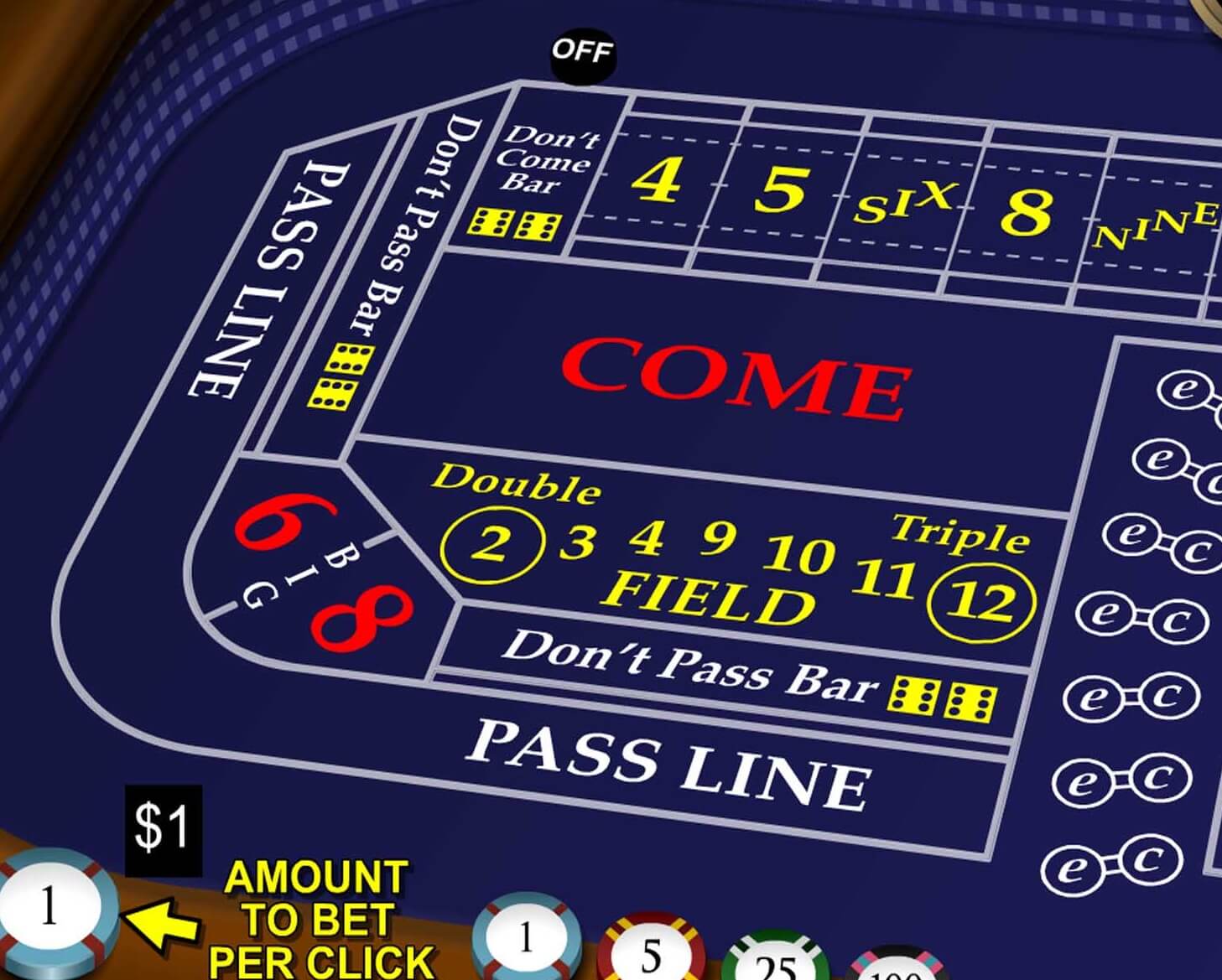 Craps is a game played with two dice. The objective of the game is to predict which number will appear on the roll. All players place a bet, and then one of the players, called a shooter, rolls the dice. The bets can be wagered on the pass line or the don’t pass line. There are three possible outcomes for the first roll of the dice. If the total of the amounts showing on the dice amounts to 7 or 11, the pass line bet wins, and that game ends. If the dice show a total of 2, 3 or 12, the total on this come out roll is called Craps. This means the don’t pass line bet will win.  If the throw of the dice gives a total amount of 4, 5, 6, 8, 9 or 10, these are known as Point numbers. If the shooter rolls any of these numbers, this will establish the Point number, and this number has to appear as a total on the dice before another 7 appears.

Once the bets are cleared, a new game will begin. Players can click on the Repeat button to place the wagers that were in place before the last roll of the dice, or he can place new wagers.

There are different forms of craps that exist today. You can play the informal version called street craps, and there is the casino craps, and the latest version, the online craps. The online version is an exciting form of craps that combines both of the other two versions, and has been slightly simplified to enable the online player to enjoy this favourite and historically rich game.

A Wide Variety of Bets

There is a variety of wagers a player can place. Players can place bets on the 4, 5, 6, 8, 9 or 10, on the pass or don’t pass, come or don’t come. Most bets are decided in a single roll of the dice, but some popular bets called contract bets, can be decided over multiple rolls. All bets on the table are removed as soon as they have been decided.

It is a good idea for potential players to do a bit of research to find out everything they can about betting on craps games before wagering real money on the outcome of any bet.

The highlight of playing craps the Real Time Gaming way, is the added animated simulation of live casino craps games. The dice are rolled across the table to hit the opposite wall and come to a standstill there. Hitting the wall is regarded as important in live casino craps because that makes sure of the randomness of the outcome. The rolling of the dice is accompanied by the appropriate sounds as well. Another feature of Real Time Gaming craps is the movement of the chips across the table when bets are decided, as well as the marker that indicates the Point.

Real Time Gaming was established in 1998, and their online casino software has grown tremendously over the last years. The company remains a leader in this industry, due to the high quality of their software. Craps is only one of the online casino games in their repertoire, but the rules of their version of craps comply with all international standards.  Most Real Time Gaming online casinos will offer a guide to the rules of shooting craps. You can also practise and play for free.